Jesus Ruvalcaba, 39, has begun his own greeting card business that draws inspiration from his upbringing in Mexican culture. 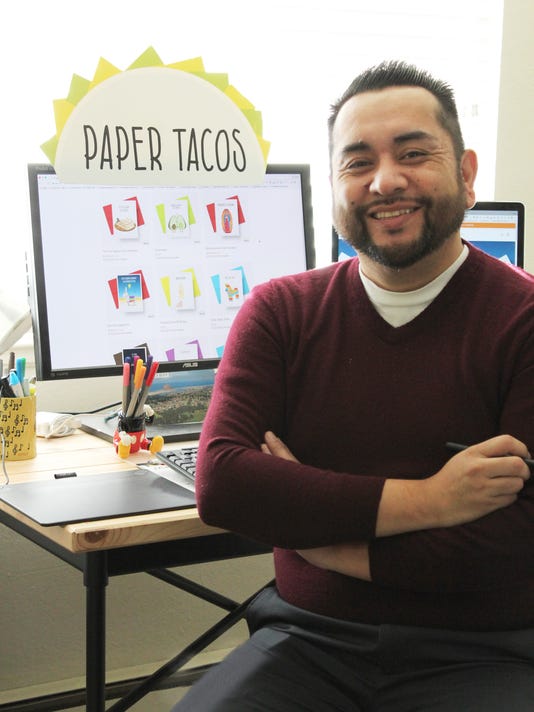 It's flu season, and now you can wish your loved one well wishes via "sana sana colita de rana" with the help of a local artist who has combined his artistic experience with his culture.

Jesus Ruvalcaba, 39, has begun his own greeting card business called Paper Tacos that draws inspiration from his upbringing in Mexican-American culture, growing up in Castroville and later in Salinas.

Ruvalcaba's parents were field workers, and it was when he was living in the isolated artichoke fields that he discovered his inspiration for drawing.

"I really liked doing things on my own and that's when I started picking up drawing," said Ruvalcaba. "I had a sketchbook all the time. My parents saw that and even though they didn't have many resources, they did their best to purchase me art supplies and encouraged me to keep drawing."

Ruvalcaba pursued a career in animation, and he took courses at Hartnell College that led him to obtain his degree in graphic design at California State University Monterey Bay. Ruvalcaba then moved on to Silicon Valley to work at eBay and Hewlett-Packard but still had the urge to do something artistic.

More: How a Redding motel is bringing culture to downtown 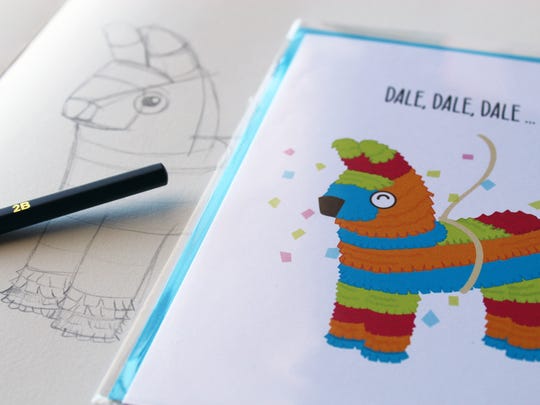 The idea to start his own greeting card business came after Ruvalcaba went to purchase his mother a card at Safeway, and he realized there was nothing from companies like Hallmark that would connect with her Mexican heritage, he said.

"I think they're missing out on that huge population that's steadily growing," said Ruvalcaba. "There's no real product out there that targets them. My long-term bigger goal is that I'm trying to get them to bigger stores."

“I thought, 'Wouldn't it be great if we put some of our traditional sayings - like if someone gets hurt, we say 'sana sana colita de rana' (heal, heal little frog), on a card to make it a get well card.”

The idea evolved further after he visited a local fair for Dia de los Muertos where he came across an artist selling prints with Spanish sayings, said Ruvalcaba.

"I thought, 'Wouldn't it be great if we put some of our traditional sayings - like if someone gets hurt, we say 'sana sana colita de rana' (heal, heal little frog), on a card to make it a get well card,'" said Ruvalcaba. "I started brainstorming with all the skills I've gotten as a graphic designer and schooling to see how many ideas I could come up with."

After printing his first set of 15 cards for Paper Tacos, Ruvalcaba went to an art fair in San Jose to test out his work in September 2017.

"The response I got from everyone were things like 'Wow these are so cool, I remember my mom used to say this'," said Ruvalcaba. "From there I said, 'I gotta do this.'"

Ruvalcaba also drew inspiration from Mexican-themed Christmas traditions like Dec. 12 for Dia de la Guadalupe and Three Kings Day during the holidays. Ruvalcaba is continuing to come up with new ideas from different holidays surrounding Mexican traditions, including some for Valentine's day.

One of the companies Ruvalcaba has partnered with is Mexican Mystery Box, a box which contains Mexican candy and novelty items that is sent out monthly to its subscribers, owned by Eddie Garcia.

Garcia said he partnered with Paper Tacos because he appreciated the clever creativity it contained and thought it would connect with people throughout the country.

"It’s not so much the artwork but it’s more the cultural cues, the references that the Mexican community would recognize," said Garcia. "This stuff is reaching folks in Colorado and Arkansas where people crave this type of connection to their culture and I think that folks like Paper Tacos can help spread culture."

Garcia said customers love the cards when they receive them in his box.

"Its one of those things were it’s an inside joke for a lot of folks so the element of surprise is what keeps people coming back to it," said Garcia.

While most of the cards for Paper Tacos are Mexican-themed, Ruvalcaba also has some themes that can appeal to those from all areas of Latin-America.

Lourdes Rodriguez, a regular customer of Paper Tacos and Hollister resident, said she likes to buy the cards because she likes to introduce the themes in the cards to the younger kids and keep old traditions alive.

“I think my favorite one right now is the 'have a Fabuloso birthday,' which is just a simple cleaning product that everybody knows.”

More: Tantardini's brings the true taste of Italy to Redding

"It can be something as simple as a frog and just the little happy face he makes on it livens up the whole mood of the card," said Rodriguez. "I think my favorite one right now is the 'have a Fabuloso birthday,' which is just a simple cleaning product that everybody knows."

Ruvalcaba sells the cards at $5 a piece and has sold about $500 a month since September, which he said is great considering he's relatively new. Ruvalcaba said his growth has been organic through social media, specifically through Instagram and notes the business became profitable just last month.

Ruvalcaba still has a full-time job as a visual designer in Santa Clara but said that if this business goes well, he may put his complete focus on Paper Tacos in the future.

This year, Ruvalcaba hopes to partner with Salinas bakeries, hospitals and others that cater to his target audience to carry and sell his greeting cards.

This article was amended to correct a monetary figure.